Nr. 32 straipsnis pavadinimu „Pride of Schenectady: Rimkus made his mark on world stage“ 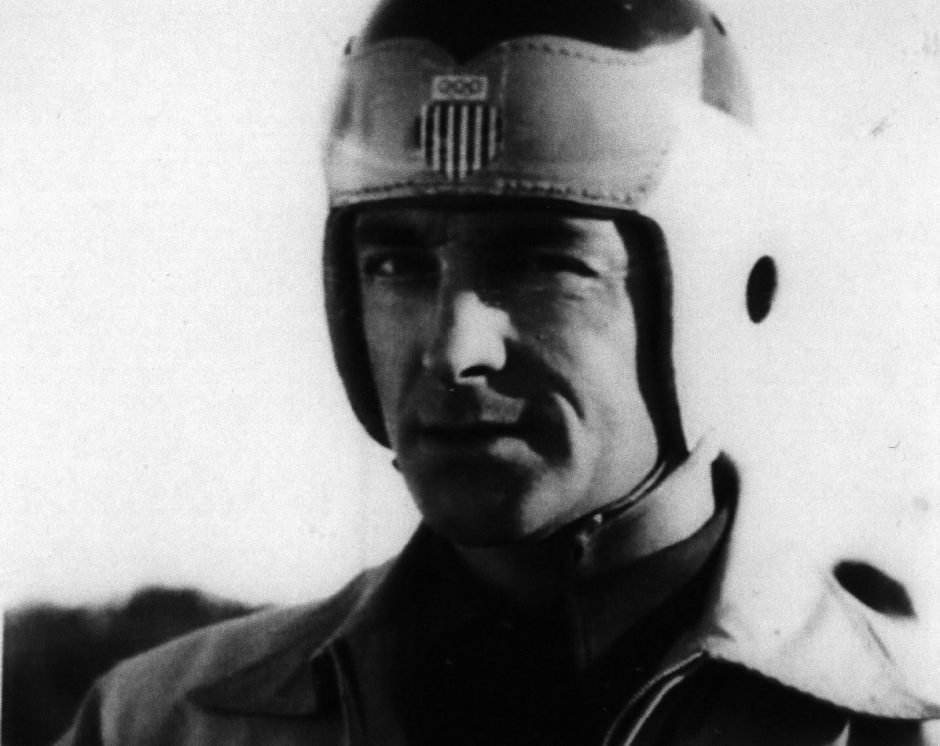 The late Ed Rimkus is better known for his Olympic exploits than for his scholastic career at the original Schenectady High School and Mont Pleasant.

Yet, an argument could be made that Rimkus, quite a practical joker in his day, would have earned his entry into the Schenectady City School District Athletic Hall of Fame even without receiving a gold medal as a member of the United States four-man bobsled team at the 1948 Olympics in St. Moritz, Switzerland.

That gold medal on the international stage sure solidified it, though.

The 1932 MP graduate was a football, basketball and track standout, and it was his performance in those sports under the guidance of legendary Mont Pleasant coach Sig Makofski that eventually enabled him to become a star bobsledder, even though he was a complete novice in that event when he tried out for the Olympic team on the advice of a few friends.

Rimkus, who only weighed about 195 pounds, quite small for any type of lineman today, played multiple positions, including blocking back, lineman and kicker for the undefeated 1931 Mont Pleasant football team, which he captained.

“He was one helluva football player,” teammate Joe Milano told The Daily Gazette in a 1996 story. “He was built like a wrestler.”

“Ed Rimkus was one of those guys who had a great career in high school and after,” said SCSD Athletic Hall of Fame committee spokesman Bob Pezzano. “So many of our Hall of Fame members were All-Americans and/or national champions. In this case, we have a gold medal winner.

“From what I understand, Ed was quite a winner, especially on the football field, where he was a captain in high school and college. But I admit that winning a gold medal is an attention grabber.”

Introduced to bobsledding in 1947, Rimkus’ four-man team finished second at the Olympic Trials in Feb. of that same year at Mount Van Hoevenberg, near Lake Placid.

His team, consisting of Francis Tyler (driver), Bill D’Amico (brakeman) and Pat Martin, won the gold medal the next year, and he became a Schenectady celebrity.

“He was a sweetheart of a man,” said Rimkus’ stepson, Cecil Proulx in a telephone call from his home in California. “He was definitely an upbeat guy. And although he was kind of a serious guy most of the time, he also had a great sense of humor. He loved to joke around and tell wry jokes. He loved to tease people.”

Proulx related a story that his stepfather told him about the 1948 Olympics.

“When he was in Switzerland, he was at this bar, and he was chatting up this nice looking woman. The next day, before he went back to the bar to see her again, he saw a horse and buggy on the way. He paid the guy a couple of bucks to grab some horse hairs, and he stuck them in his shirt. He made it look like he had a nice, hairy chest, and when he got some nice comments from the girl, he pulled out the horse hairs, and she couldn’t stop laughing.”

Despite Rimkus’ outstanding football career, he didn’t watch much pro football on television.

“He never liked watching much football, but he fell in love with the Los Angeles Lakers and watched them all the time. Maybe it was because he spent some time coaching a girls’ basketball team at some point in his career,” Proulx said.

“He was just a good soul. He never got angry at anybody, and he didn’t ask a lot out of life. He wasn’t that adventurous, so it’s kind of ironic that he made the U.S. Olympic team without even preparing for it. He told us it was really just a quirk, and that some guys pulled him into it. He thought it was a lot of fun, and he used to love to tell people stories about those days. He also told us about a lot of practical jokes he pulled on his Olympic teammates.”

Upon his retirement from athletics, Rimkus worked for General Electric, where he originally had a job before trying out for the Olympic team, and he ended up doing quite a bit of travelling. The Korean War veteran spent time in Bremerton, Wash., and in Hawaii before moving to California.

In his later years, he had triple bypass surgery and later suffered kidney failure and dialysis treatment three times a week. He died in Long Beach, Calif., in 1999.